Ceddie was my first corgi, my dream dog, my soul dog and shadow.  He was like my other Corgis a Natural Bobtail , meaning born with a short tail , his was half-length. He was not easy, except for two hand-picked friends he did not like other dogs, but he loved people. He was the typical highly intelligent herding dog, knew and followed more than 30 commands, participated in the motion study for the book "Hunde in Bewegung" by Fr. Laukner. He had some food intolerances and put me in terms of nutrition from an early age on  to task before we found the right food for him. When we had to put him to sleep at the age of 12 ½ years as a result of cancer, my heart broke. His urn is in the place in the apartment  that was the most important to him during his lifetime, centrally everything in sight, a police dog would have been lost on him. 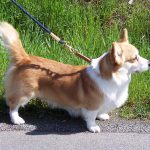 Our Pippin was born with an ultra-short natural bobtail, just one vertebrae, in a dark red with very little white, and was the dream of his breeder until she realized that he would have a long coat, the longhair is unfortunately a breeding-exclusion mistake in the Pembroke breed. Fluffies as they are called, the rare long-haired Corgis not only look different, no, they also have a very special nature. Pippin was the Peter Pan among the Corgis, he never wanted to grow up, we always thought maybe next year but we waited in vain for 13½ years he stayed the class clown all his life, always good for crazy ideas and a surprise. You could not be angry with him because he used all his fluffy charm mercilessly "I'm so cute you have to love me" lovingly, cuddly and very special. His favorite sleeping position “ the living U-Turn” will always be unforgotten. With three he fell ill with Lyme disease, which unfortunately wasn’t discovered for years and had already caused great damage in his joints. He was a very special dog we will never forget. 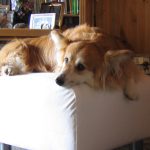